The Chinese national weightlifting championships for women were held in Kaihua, Zhejiang Province China between 10:16- 19, 2020. The competition was readily available to view online; so what follows are notes of what transpired at this competition.

Although the level of the competition was quite high despite the effect of the pandemic; here are a number observations of the state of Chinese weightlifting as reflected in the performances of these championships.

A number of veterans of the national team were defeated at 49, 55, 59 kg, 76 kg and 87 kg. One cause and effect of training on and competing with the national team is the women tend to put on more muscle mass (over time) especially in the upper body. Unnecessary muscle mass in upper extremities raises body center of mass and presumably raises the difficulty of making weight for the class. These five former world champions had the effects of years of training with the national team; where, a lot of pulls, presses and muscle building exercises are employed. Their arm and shoulder muscles were larger; they tended to be slower dropping into the squat and have possibly lost some flexibility in lower extremities and shoulder girdle.

For example, Olympic champion XIANG Yanmei placed 2nd; although only 27 her flexibility is going as is her ability to lock her elbows; a consequence of years of pulling.

A consequence of the large volume pulling, squatting, pressing and bodybuilding exercises, typical of Chinese training methods; many of the jerks missed at these championships were basically a pull, a squat, a press up, then drop the barbell forward. This was the case even when the lifter tried to scissors low to save a lift; although, with back knee bent and barbell a little in front; for many, even this remedy failed.

In some respects many of the lifters have similar characteristics to the Japanese and South Koreans: good at pulling and squatting; mediocre to poor at fixing the weight in snatch and jerk.That being said, don’t forget you only get credit for what you fix overhead in snatch and jerk; not how high the barbell was pulled or how easy the squat.

An indication of how technique is taught is the large number of snatches were lost behind after reaching fully outstretched arms. The Chinese tend to accentuate the turning the bar over forcefully with arms and shoulders; even with an unloaded bar. So, it is possible fixing the weight in the low squat for the snatch lacks the coordination of hands and feet in fixing the weight, i.e., there is too much effort from the arms to throw the weight to arms’ length and bring it behind the head and too little to set a base of support through the feet.

The most common deficiency at these championships and probably Chinese lifters in general; with notable exceptions; is the lack of skill to balance; especially in the snatch. Many lifters would spend very little time over the bar in the starting position to feel their balance and get an awareness of their position in space. Quite a few simply walked to the barbell; gripped the bar and immediately started to lift; and, in most cases had no idea where the barbell was when they tried to fix it in the squat.

Two lifters stood out; from the many competitors who seemed to be stamped from the same mold.

The two lifters who both placed 2nd in their respective weight classes out the many who competed stood out due to their atypicality. One was a muscless wonder; a Sino – Bulgarian, if you will; who snatched an unofficial world record 123 kg in the 71 kg class. Tall, slight of muscle mass, especially in the upper extremities, wearing glasses; she  looked like some bookworm out of place at a competition of strong women. That is until she displayed her prowess putting on a clinic with her excellent snatch technique; with three good lifts of 115 – 120 – 123; far outdistancing the entire field. 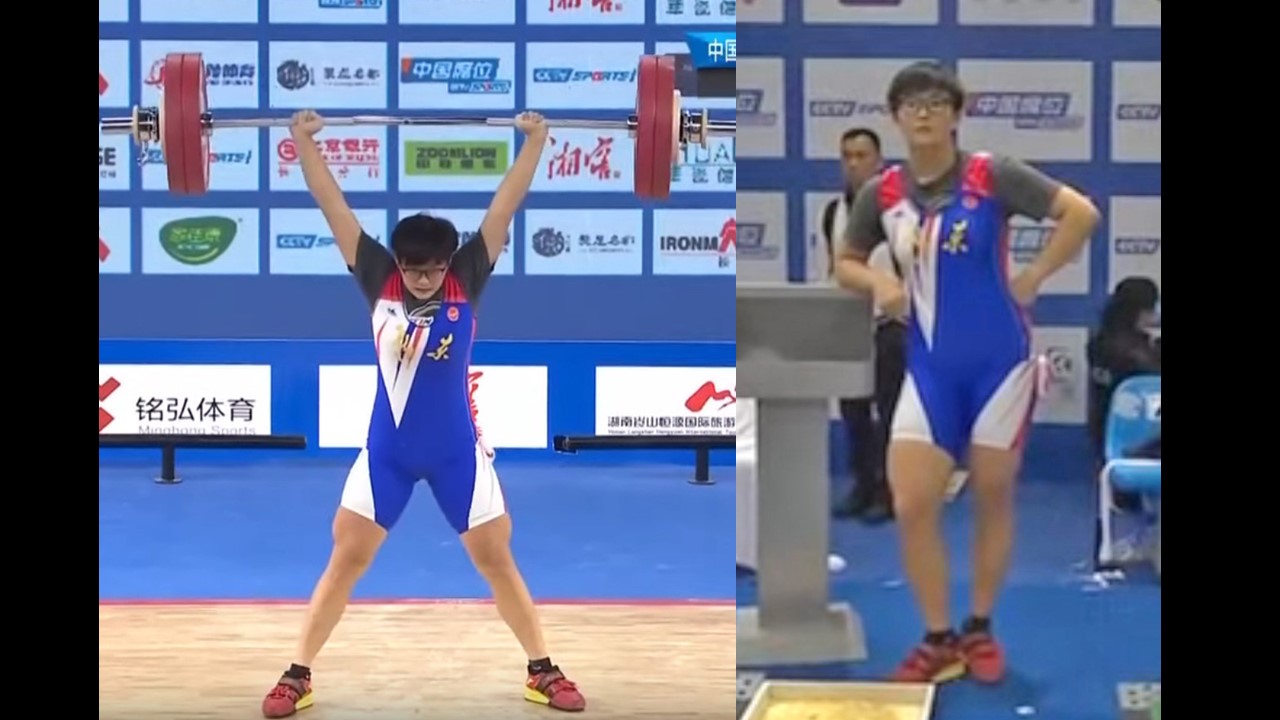 Figure 1. An unlikely looking ‘worlds’ strongest woman in the snatch at 71 kg.

She clean and jerked only 131; barely able to stand from the squat with this weight and had no technique in the jerk. But these are things that can be worked on. The question that comes to mind, as to why the others in this class, with more muscle mass, stronger legs and so forth, were so far out-classed by this young woman in the snatch? Her speed – strength and motor skills were highly developed; yet her strength is lagging; although this is typical of young athletes. Big muscles are no guarantee of success in the biathlon era. Muscleless wonders can lift the biggest weights too.

The other ‘atypical’ lifter was in the 81 kg class. She had the physique of an upside down coke bottle: wide torso and broad shoulders with narrow hips; short arms; small hands. However unlikely she looked to be an athlete; she was just that; and not just a very good athlete; an excellent weightlifting technician. She dropped like a bullet under three good snatches; hitting low, stable positions. She also had very good technique in the clean and jerk finishing the competition with 115 + 147.

Between snatch attempts one of the coaches was advising  her to try to raise her elbows high in the pull; an antithetical to her modern technique and nonsensical to boot.The particulars of her circumstance serves as a perfect example of a good athlete getting bad advice; but doing the right thing on the platform.  This is a common occurrence even at big competitions; where a clueless coach gives bad advice; the athlete listens; fortunately, the body does the right things anyways.

Two former champions placed second in their respective new weight classes moving up seven and eleven kg respectively. They lifted less in the new weight class than their results when they were lighter in bodyweight. Just gaining weight does not necessarily mean a female lifter’s results will improve proportionally even if the athlete is elite as these were both former world champions.

It is easy to overlook the most serious problem confronting weightlifting in light of the politics and problems with doping control. The real problem is weightlifting has become an anti – spectator event. Competitions tend to be terribly boring. There are too many rules; too many officials; too much dead time; too many mistakes; redundant protocols. The audience, such as it is, is seated so far from the platform the organizers should issue binoculars to whoever braves to come into the arenas.

All sport have problems with federation politics; with doping, whether pharmaceutical or technological. Many of our problems in weightlifting would be viewed in a totally different light were the Olympics and other international arenas packed with weightlifting fans who were able to enjoy the spectacle of strength and actually understand what is transpiring in front of them at the same time. Too many sessions of weightlifting are terribly boring; about as entertaining as funerals.

In all too many instances officials don’t even have a functional knowledge of weightlifting.

For example, it should go without saying the barbell must be loaded and fixed so that the discs are all equidistant from the center; the collars are locked down so the discs remain in place as the athlete lifts the weight. Three referees and five jury sit in front of the platform. Furthermore, there are two in reserve. There are 5 – 6 loaders, a technical controller and numerous others who can view the competition on video monitors. 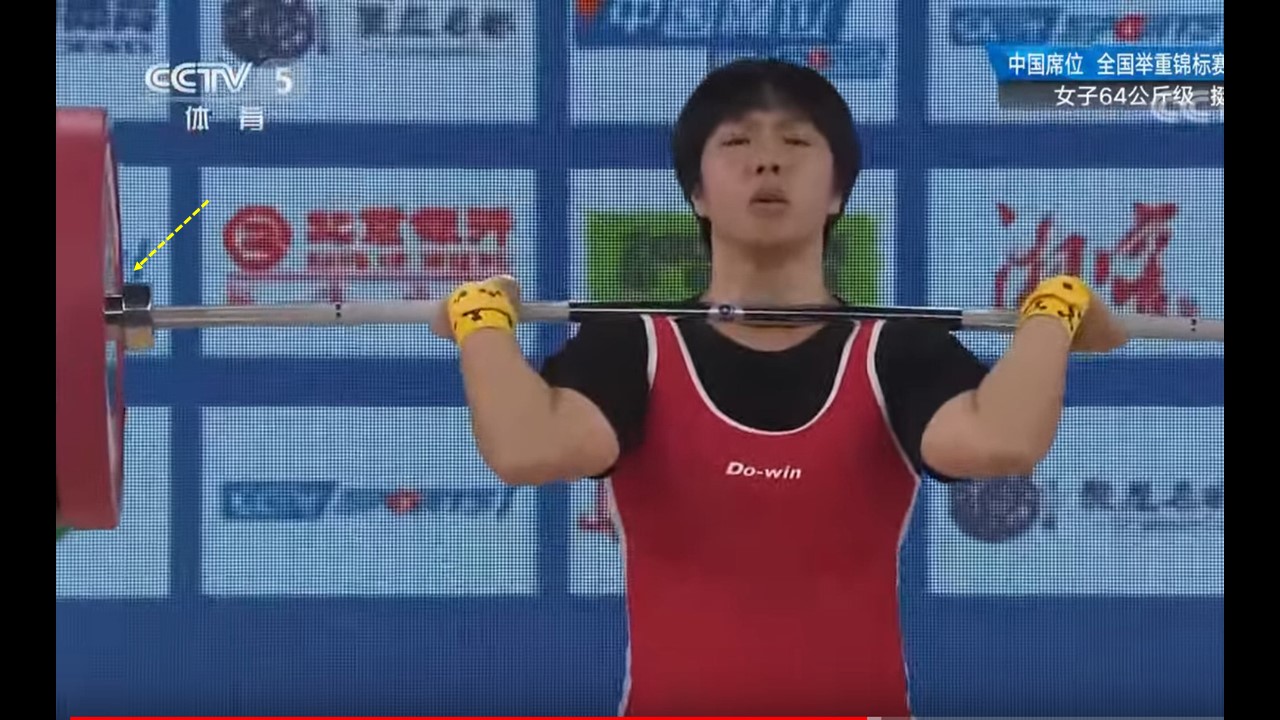 Figures 2 – 3. In the top photo a 64 kg female lifter at the 2020 Chinese national championships prepares to jerk 123 kg with weights sliding off right side of barbell and 1.5 discs extended further out on bar (not shown). The extended disposition of the 2 kg disc on the right side unbalances the barbell in the lower photo.

Two athletes endeavored to lift unbalanced barbells; one barely made one with 124. Both were lucky to avoid injury straining to balance and fix lopsided barbells. Not one official noticed. Neither athlete was allotted an additional attempt to lift a balanced barbell. 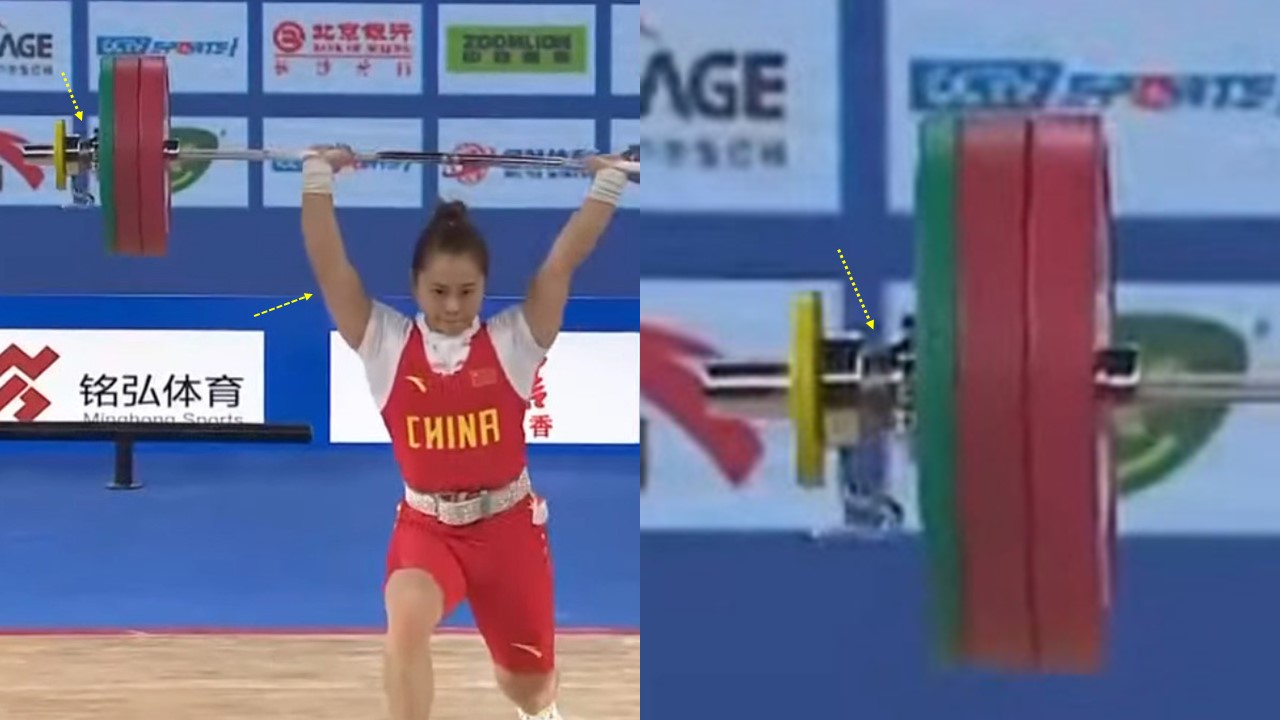 Figure 4. DENG Wei struggled but was unable to lock right arm with 143 kg twice. The 1.5 kg disc loaded on the collar according to the protocols is further out on the right side of the barbell in relation to the left. The collar was not wound down as it should be; unbalancing barbell.

The unscrewed collar on the right side of the barbell had an obvious effect on DENG Wei when she attempted 143 kg; missing it twice (figure 4). In both cases, someone who never has a problem locking her arms was unable to lock her right elbow; the side of the barbell with the unscrewed collar and the 1.5 kg disc pushed out further from the center of the barbell. The best female weightlifter of our days could have been injured as well, struggling to lift an unbalanced weight. Where were the three referees and five jury?

Another problem with the officiating at these championships was the ‘elbow flicker’, i.e., a press out infraction with no press out. Many lifts were turned down for press out where there was no press out; a wobble, a flicker of movement  which did not constitute bending and straightening the elbow. This situation hurts the sport. A completely motionless elbow is unrealistic given the circumstances of lifting maximum weights involving high speed of movement. In fact, it may even predispose the lifters to elbow injury as they may be compelled to focus excessively on ‘slamming the elbows’ to lock out.  See www.sportivnypress.com “A solution to an old problem”. 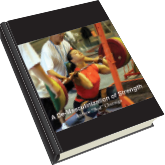